What God Requires of Us

He has shown you, o mortal, what is good.
And what does the Lord require of you?
To act justly, and to love mercy,
And to walk humbly with your God. Micah 6:8

Yesterday, George told me about a video he saw of a woman stealing a foul ball from a little girl at a baseball game. The woman had fumbled it, and it flew right into the little girl's hands, so the woman snatched it away from the girl and high-fived the men behind her to celebrate.

What does it mean to act justly, or as the translation in the photo says, to do justly? What is just?

The Old Testament gives us a lot of law. God gave Moses the Ten Commandments, and then expanded His law in more detail, including what animals His people could eat and how to treat slaves. When Jesus came, he was born into a world where the Law had taken on incredible levels of specificity and severity, a world in which the Law had shifted from being a blessing from God to man and become a burden and barrier between man and God. The purity laws alone were crushing.

What is just? That which arises from fairness, honesty, compassion, kindness, and generosity. I used to believe that capital punishment was just...a life for a life. But then I learned that most of the people on death row are African Americans from poor backgrounds. A white man from a poor background has a far lower chance of being executed than an African American who commits the same crime, the same level of horror.

That is not just.

Now, I oppose the death penalty, not because I think those who kill do not deserve to die, but because I no longer naively believe that our justice system is, itself, entirely just.

When I was in Madison, I noticed more homeless people than in any previous visit. It feels wrong to walk by them and not respond to their requests for money. I am blessed. I have a home and family and comforts in excess. Many people feel scorn and contempt for the homeless, and believe that they get what they deserve, that they could get back on their feet if they really wanted to and clearly they don't really want to so why help them anyway. If it weren't for their bad decisions, they could live normally.

So many of the homeless are mentally ill. Of course they make bad decisions. You try making good decisions when there are voices in your head telling you strange things or you think the government is out to kidnap you for bizarre experiments or you are crippled by addiction. Helping people with mental illness is crushingly difficult, crushingly expensive, and crushingly sad. We know so little that truly helps, but we also know handing them money is probably not a good response either. In our helplessness to lift up, it's easier and more comfortable to look away...or down.

Others are homeless because they lived on the margins, in poverty because of birth or lack of education or lack of opportunity, just one disaster away from losing everything...and then the disaster hits. Our church is part of an Interfaith Hospitality Network. We house homeless families for a week at a time while public and private services work to get them back on their feet. The program works for many families. But they still live on the margins, one disaster away from living in churches again.

Beth Moore tells a story of being in an airport and seeing an old man in a wheelchair. He had incredibly long, messy hair. Moore heard God tell her to brush the man's hair. How in the world does a woman approach a total stranger in an airport and offer to brush his hair?

By walking humbly with her God.

What does it mean to be humble? It doesn't mean thinking less of yourself, but thinking of yourself less. It means putting God always before you, not just during an hour of worship on Sunday. It means putting others' needs ahead of your own. It means paying attention to those needs and meeting them when you should...even if you don't want to or it isn't convenient. It means obeying God even when you don't understand. It means keeping your mouth shut when you'd rather make others listen to you.

Walk humbly with your God.

Micah tells us to focus on these three things, for they are certainly difficult enough to be the work of a lifetime.

Reflection: Think of times you've succeeded in each of these three things, and of times you've failed. How might you learn to overcome the failures and step out in faith?

My Perspective, for What It's Worth

If you don't read my other blogs, you might not know that George and I are currently in Madison, Wisconsin, so he can do the Ironman race on Sunday. Read about it on Questioning my Intelligence if you dare.

On a religious note, I'm reading a lot of righteous indignation regarding the Victoria Osteen video. I try very hard to ignore theological controversies because I'm too busy trying to follow the red parts of the Bible, which is really difficult because people will annoy me and I will find myself wanting to dope slap them, and Jesus definitely tells us not to dope slap people, no matter how annoying they are.

Anyway, you have no idea the lengths to which I go to avoid the ugly, divisive underbelly of contentious Christianity, even within my own denomination, so I will confess right here and now that I had never heard of "prosperity theology" before learning of this particular controversy. I have no idea if the accusations of heresy being hurled at the Osteens are valid or not, and I am glad that we've come a long way from the days of the Inquisition so they need not fear for their lives at the hands of the righteously indignant.

I believe that, mostly, we're all just trying to find our way through this life as best we can, and we seriously need to love one another because that's what Jesus said for us to do. Love one another and don't dope slap people.

It's in the Sermon on the Mount, I'm sure.

I love Jesus, and because of that, I don't plan on wasting His time by praying for winning numbers for the lottery. Generally, I ask Him what He wants me to do and not what He can do for me. And when I go to church, it's most definitely to worship God because I'm actually perfectly happy sitting at home on Sunday morning in my jammies sipping coffee and pinning stuff on Pinterest.

So I'm going to share my perspective on this issue with a quotation from C.S. Lewis (so you know I'm not alone in my opinion). 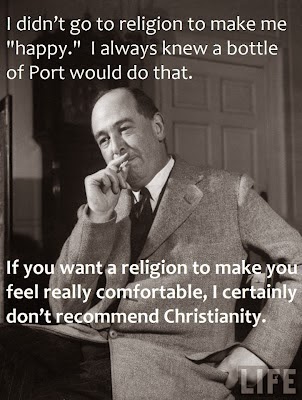 We're Christians. Let's choose to focus on Christ, on the red parts of the Bible, on loving-kindness and compassion.

Peace, love, and harmony coming at you from Madison.

Susan Raihala
My name is Susan Raihala, and welcome to my blog! I live with my husband, George, our two boys, and our golden retrievers. My days are spent teaching English composition at Sinclair Community College, volunteering as a Stephen Ministry leader, writing, paper-crafting, and reading. Welcome to my little corner of the internet.